Woodmail was the second project I completed in my first studio class, 4.031 Design Studio: Objects and Interaction.

During the first unit, I learned rule-based design and woodworking through building my own chair. In the second unit, we shifted focus to parametric design and laser cutting through creating lampshades.

Our task was to design and fabricate a three-dimensional lampshade from two-dimensional laser cut parts, which should be assembled without tape or glue.

Given Rhino, Grasshopper, and a combination of baltic birch 1/8” plywood and translucent polypropylene sheets, we set off to explore how lampshades of different geometries and opacities could play with light and shadow. 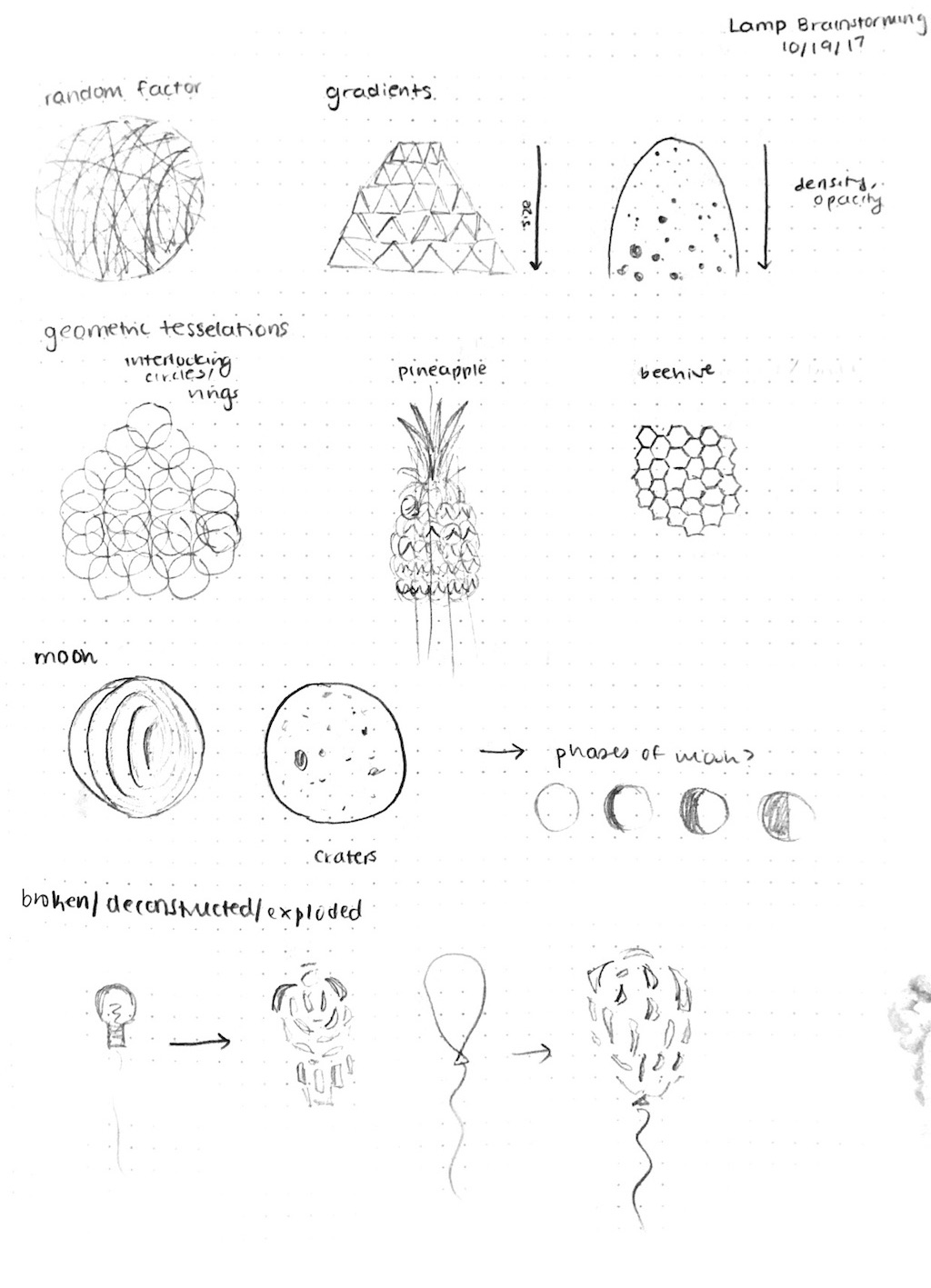 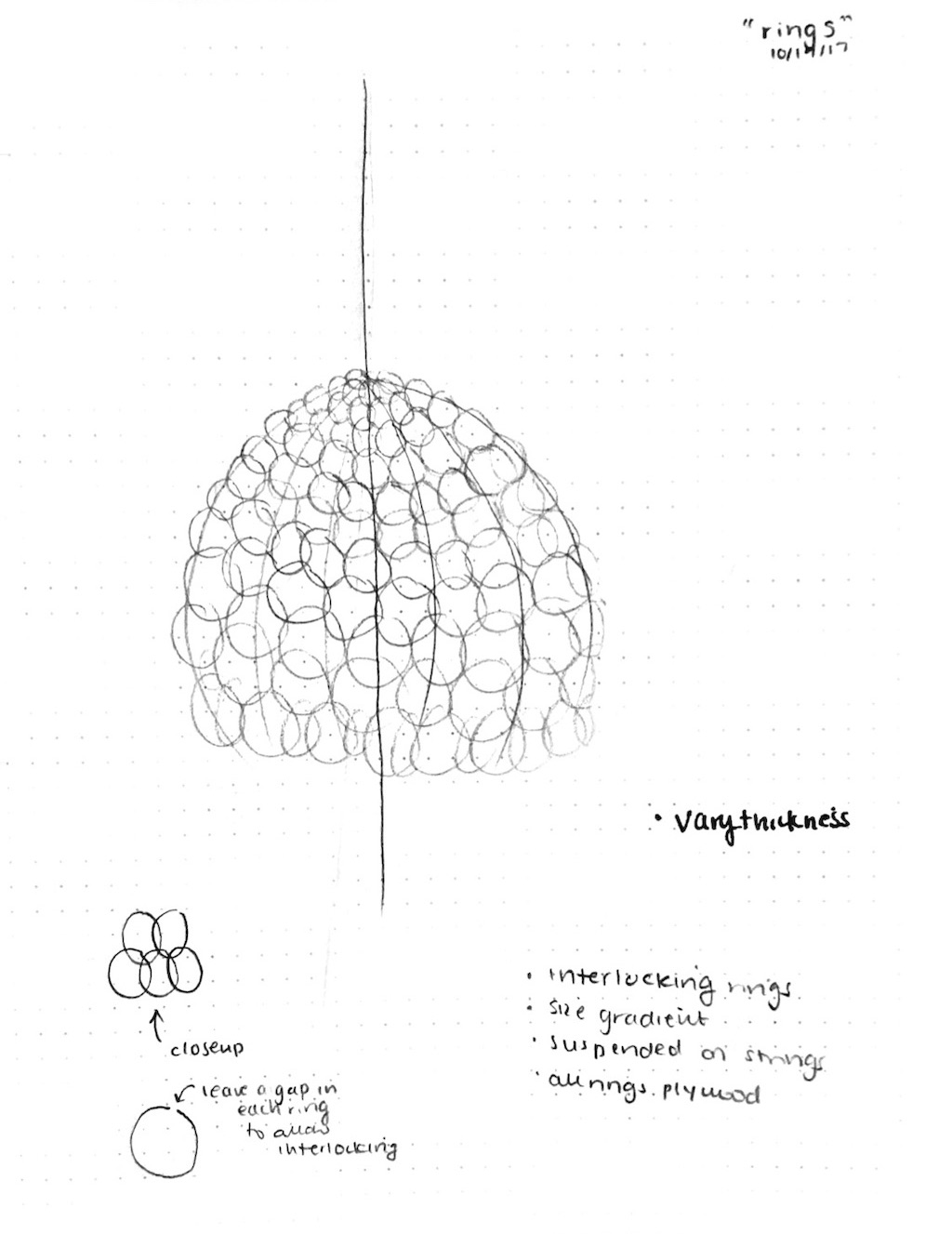 Some early sketches from the brainstorming phase of my lamp project.

There are so many creative ways to play with light and cast unique shadows. I thought of a "gradient lamp", which would utilize components of decreasing size, density, or opacity to gradually allow more light to shine through. I imagined a "moon lamp"—by carefully designing concentric shells, I could manipulate the lamp to show different moon phases at different viewing angles. For form, I drew inspiration from repeated geometric patterns found in both nature, such as beehives and pineapples, and manmade objects, like interlocking rings.

During my first desk crit, my class instructors were immediately excited about the interlocking rings idea, which they said reminded them of chainmail. They showed me images of numerous sculptures of people and animals, all composed entirely of chainmail. While I saw more potential in my other ideas, I found it interesting that something as simple as chainmail, essentially just small interlocking metal rings in special patterns, could produce such expressive sculptures. I decided to give the chainmail idea a try.

I found it interesting that something as simple as chainmail, essentially just small interlocking metal rings in special patterns, could produce such expressive sculptures.

The heart of chainmail lies in how the individual rings connect, so I opted for a bottom up design approach. 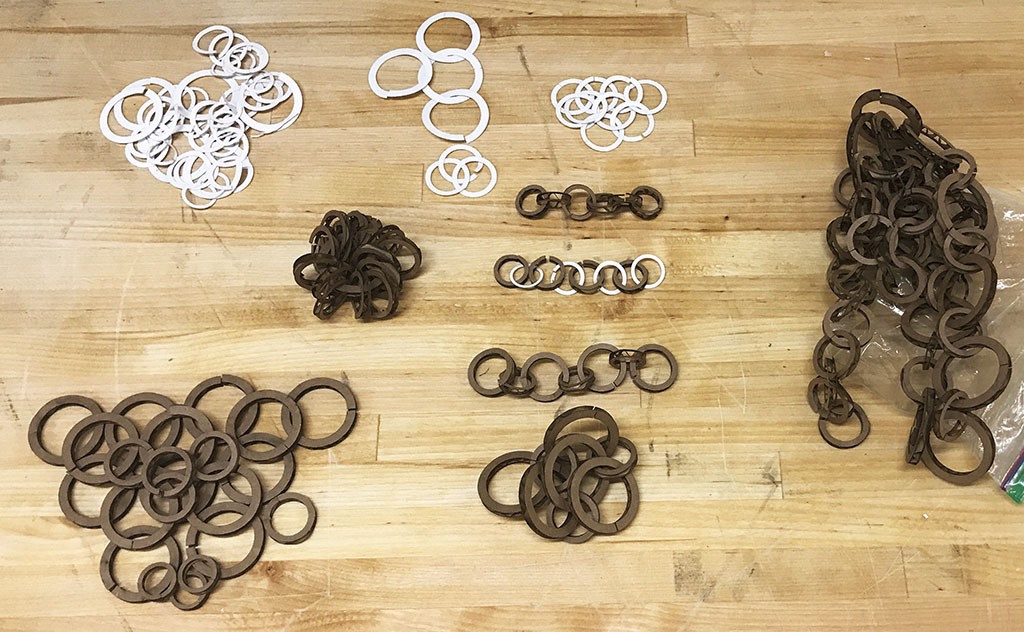 How many different ways can I link these rings?

Using cardboard and paper to represent plywood and polypropylene, I laser cut rings and explored different ways to arrange and connect them. Some questions I asked myself were:

While prototyping with cardboard and paper worked well for other students' designs, it proved to be difficult for mine. Flimsy cardboard was an unideal approximation for plywood, especially when my rings relied on the rigidity of wood to hold together. If I couldn't guarantee that two cardboard rings would link, I certainly couldn't make a cardboard lamp.

When my next crit came around, I brought up my concern to my instructors, but they advised against switching ideas or using different prototyping materials from what the class provided. They suggested that I try cutting larger and thicker cardboard rings.

Flimsy cardboard was an unideal approximation for plywood, especially when my rings relied on the rigidity of wood to hold together.

I was doubtful, but I persisted. Following their advice, I modified my ring design, went back into the laser cutter room, and spent hours recutting and testing cardboard rings until they locked together. My new rings still weren't rigid enough to keep a lamp from falling apart, but they performed significantly better than the previous ones. I presented my progress at the next crit.

The four different types of rings I came up with. 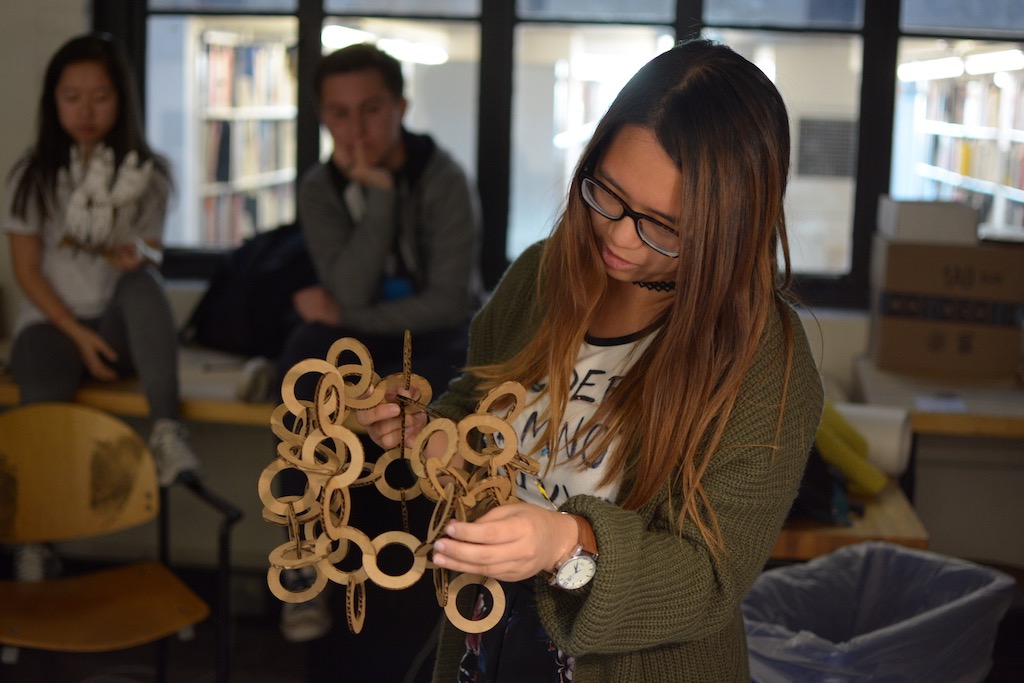 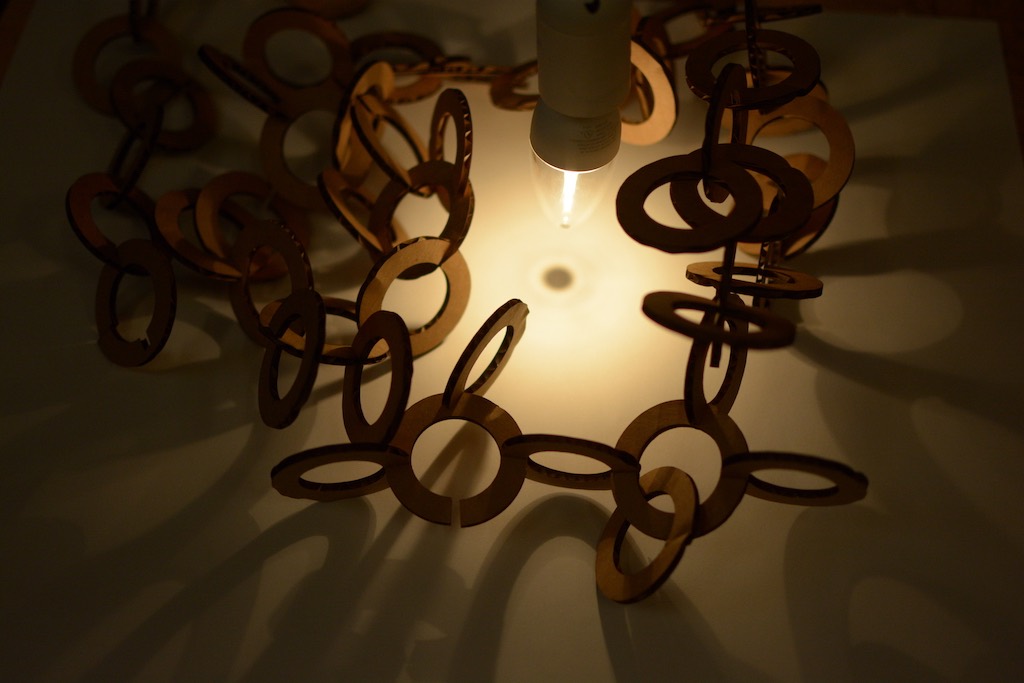 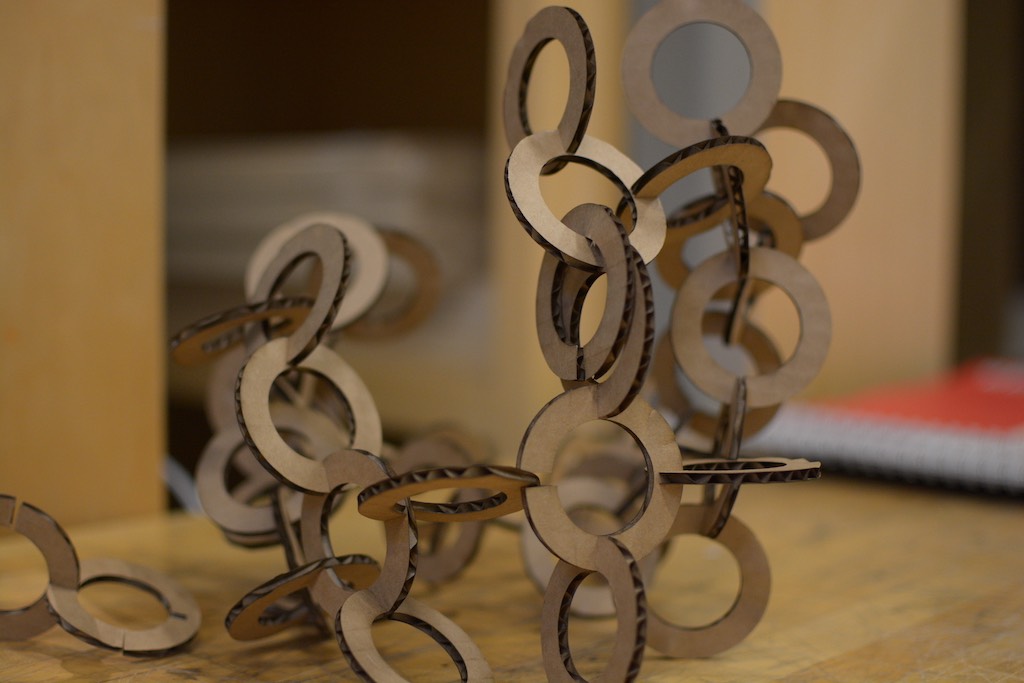 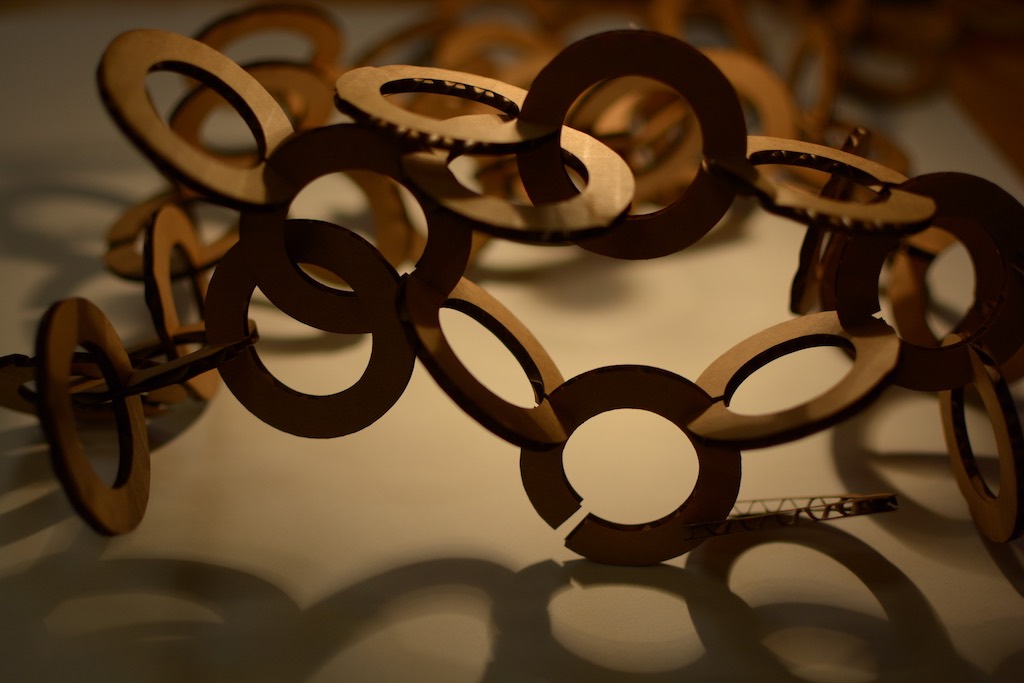 Presenting my prototypes, light on and light off. 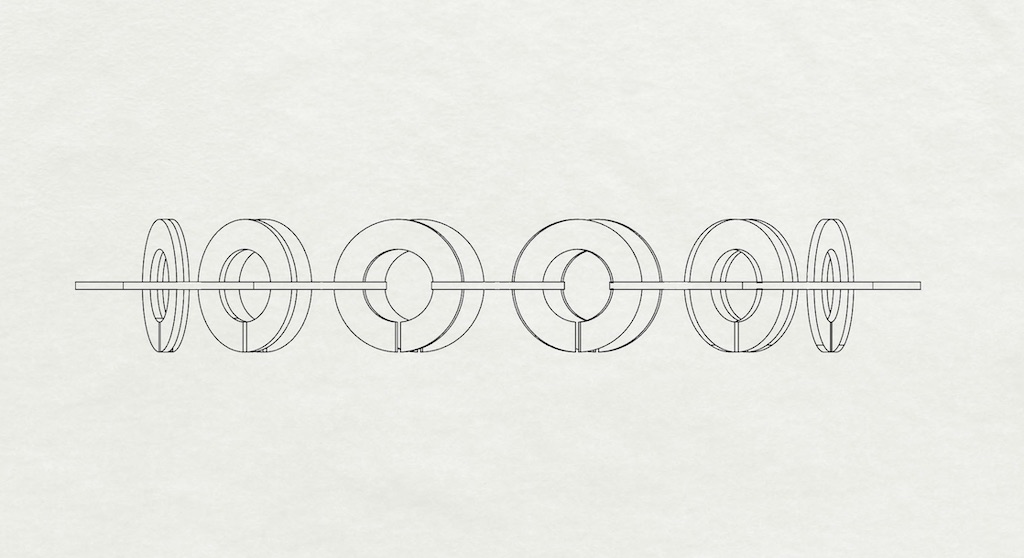 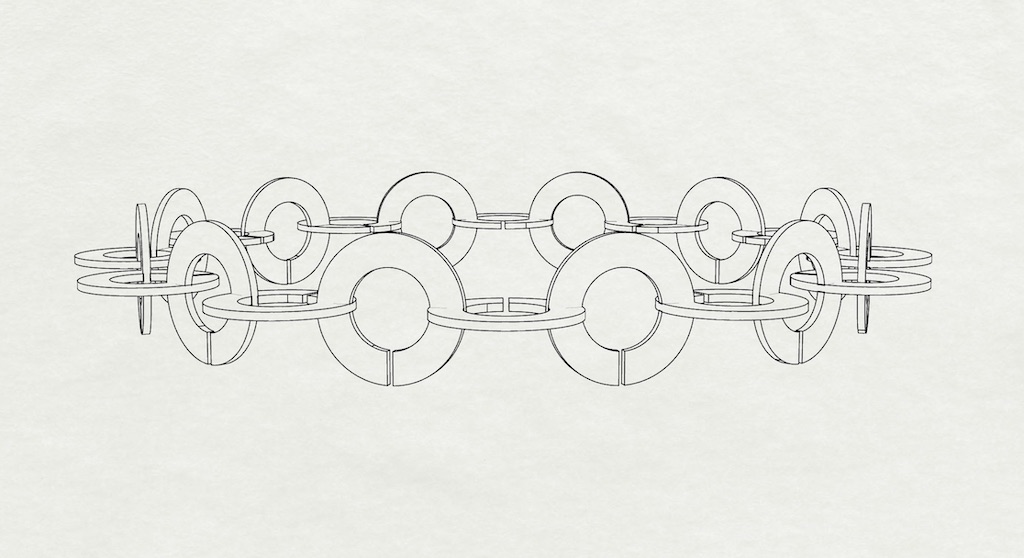 In my final design, I created three types of rings: the middle and right rings link together in an alternating pattern to form a dodecagon layer, and then the left ring connects layers to form a cylinder.

Not counting the rings in between layers, there are 24 rings per layer, 12 representing sides and 12 representing vertices. The angle between the slanted slits in the right ring is 150º, the interior angle for a regular polygon with 12 sides.

After finalizing my designs in Rhino, I was ready laser cut the rings—using real plywood this time—and assemble them to build my lamp! 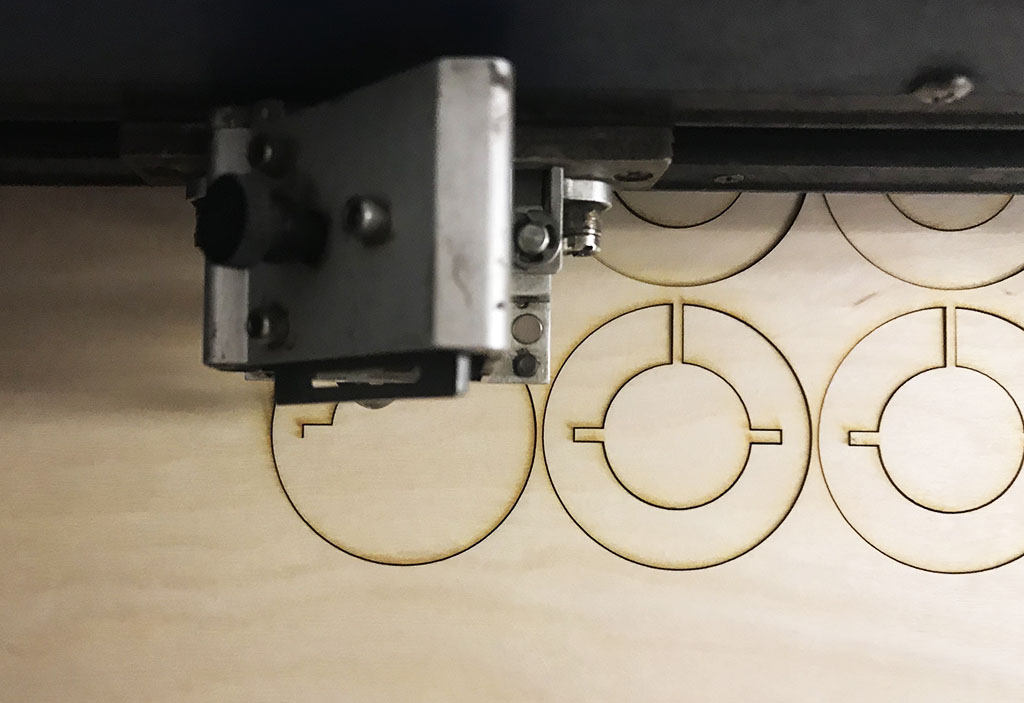 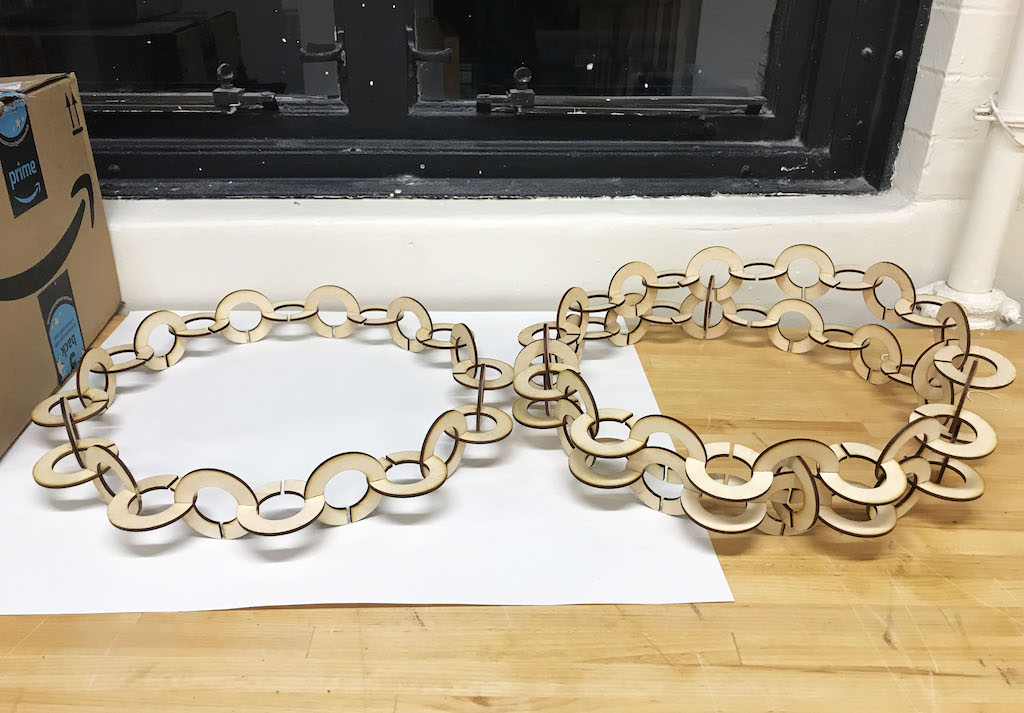 Cutting and assembling the rings.

The plywood ring connections turned out to be very stable, and I was happy to see the whole lamp come together, especially when I turned the lights off in the photo studio and saw the shadows it casted on the walls.

I learned valuable lessons from this project. I gained many hours of Rhino modeling and laser cutting experience. I found that no matter how precise the laser cutter, I can't rely on exact fits—one 0.125"-wide slit isn't always going to slide perfectly into another.

In retrospect, I made the wrong decision to keep prototyping with cardboard—if I ever discover again that a material is unfit for a prototype, I should switch to another right away. The ability to build full prototypes gave other students more freedom to explore and iterate, which allowed them to gain more insight from the prototyping phase of their projects. Being concerned about and constrained by cardboard led me to miss out on potential exploration.

I also learned that it's important to value my own opinion. In the beginning, I went straight for the idea my instructors liked best, but maybe my other ideas did have potential—I wouldn't know unless I gave them a chance.

Ultimately, this project was a tough journey, and I'm proud of the lamp that I've created this semester, as well as how much I've grown along the way. 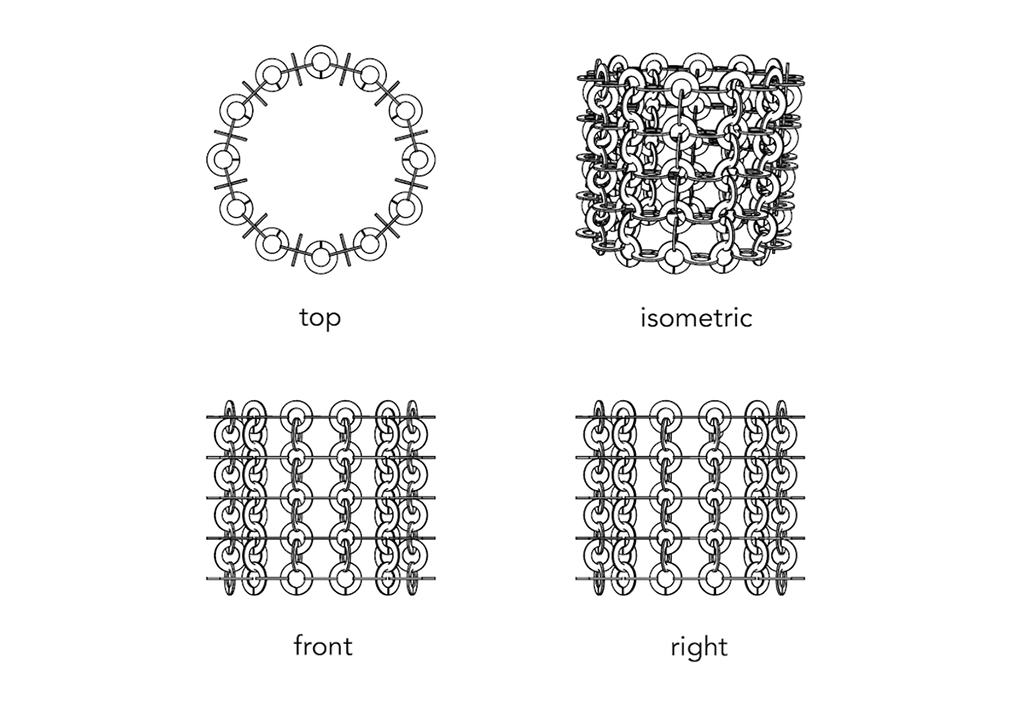 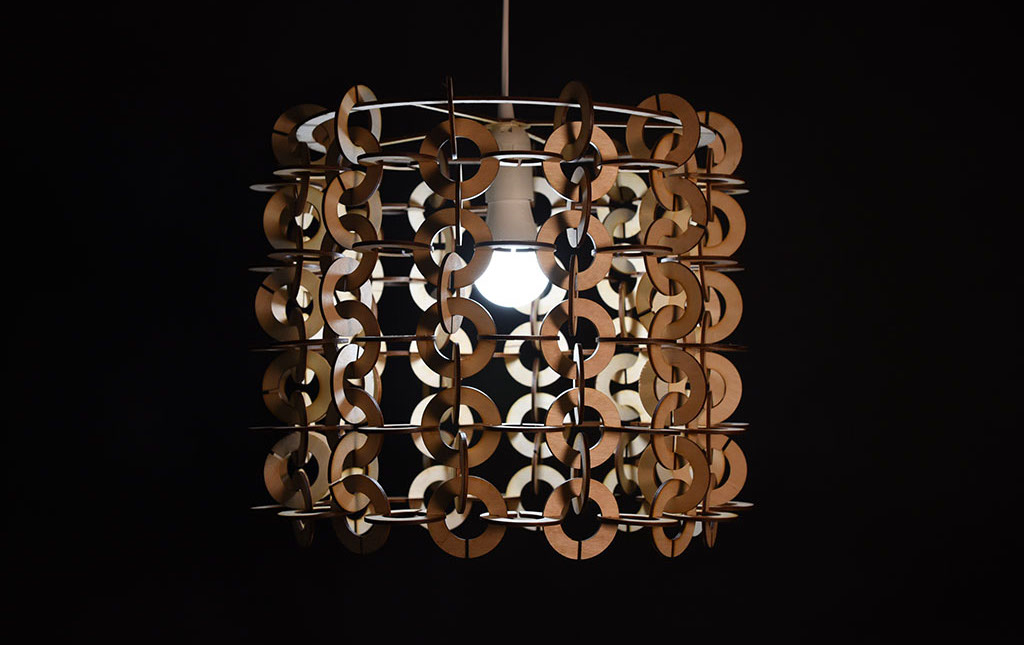 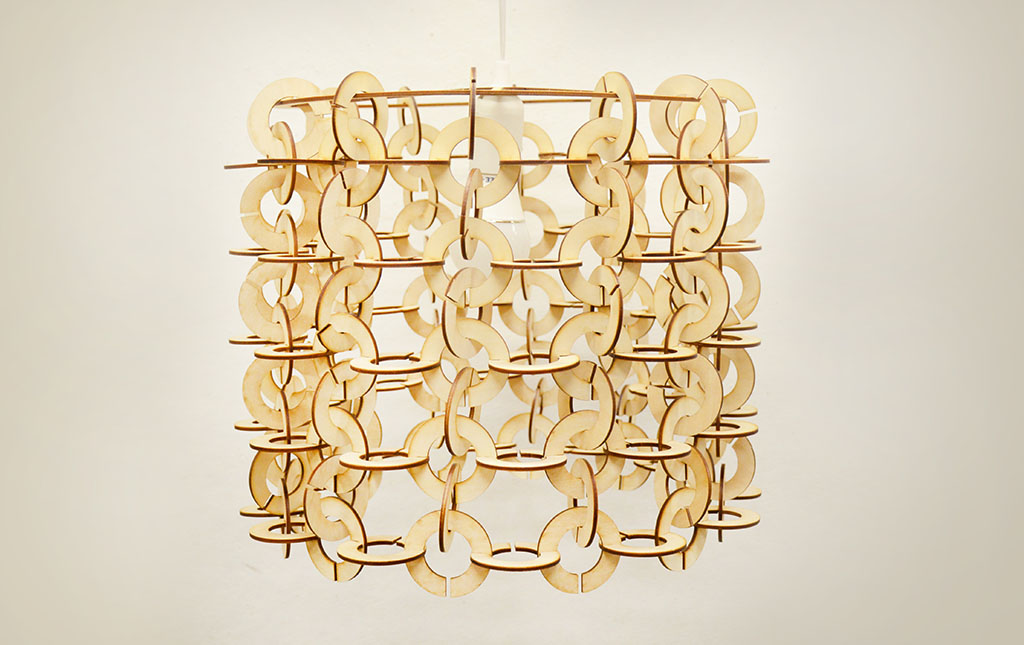 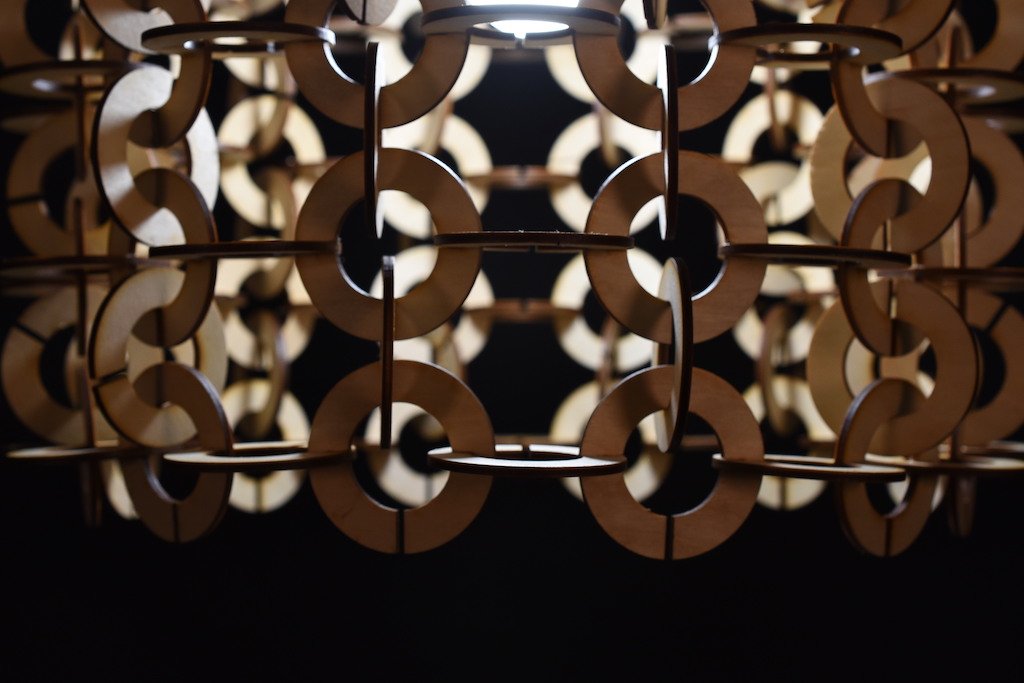 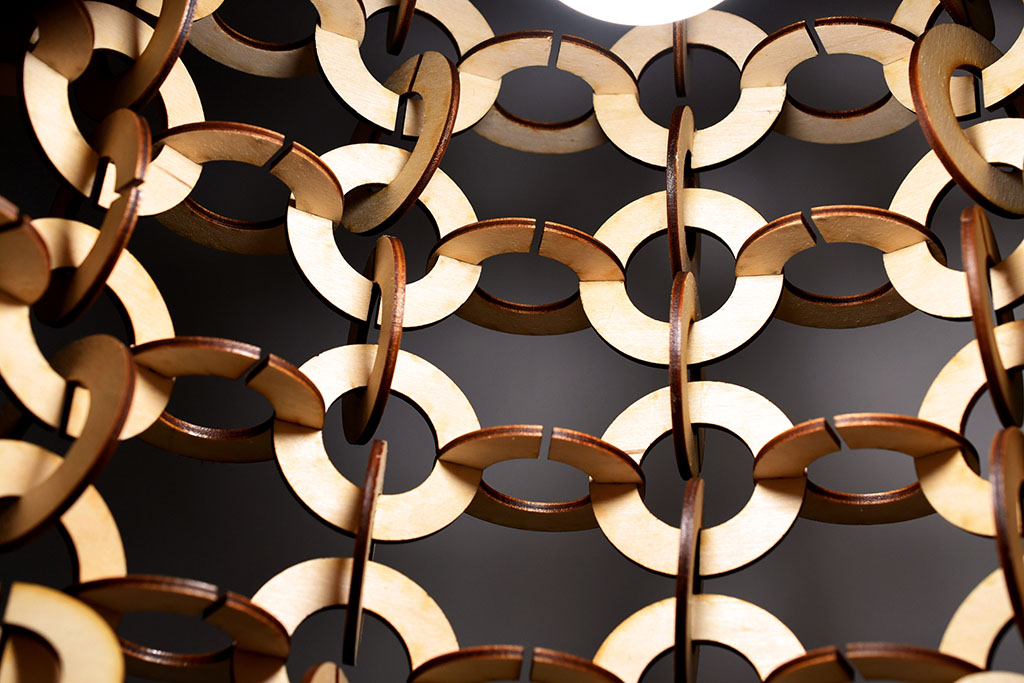 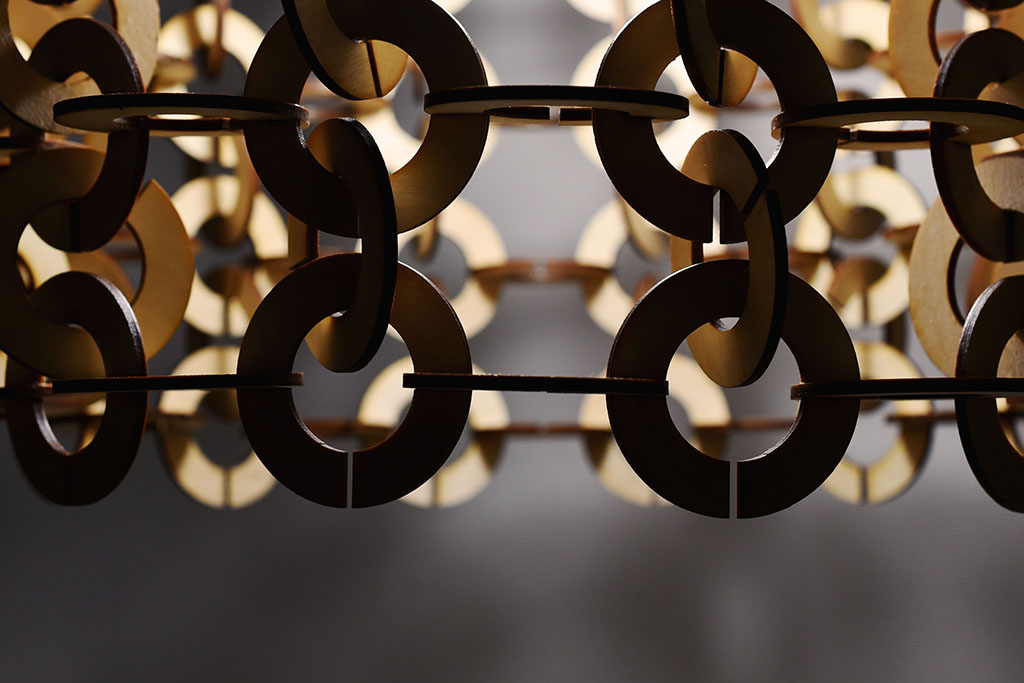 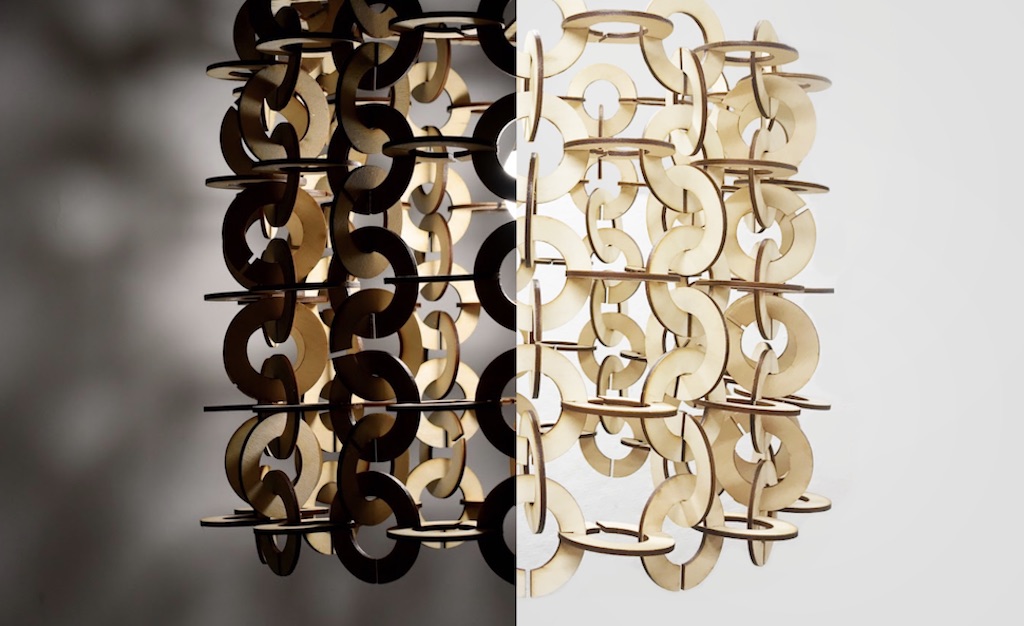 The final lamp, lights on and lights off.