I created Aromigo with my team in Tangible Interfaces, an interaction design class taught by the Tangible Media group at the MIT Media Lab. For this project, I focused on Arduino programming, working with the sensors and XBee, and learning about principles of interaction design.

It’s said that of the five senses (sight, hearing, smell, touch, and taste), smell is most powerfully linked to memory. We associate smells with many people and places around us. What if we used smell as means of communication, as a way to show that we’re thinking of one another?

Alex and Bailey are in a long-distance relationship and own a pair of Aromigos. Back when they lived closer together, Bailey would always use lavender-scented lotion, and whenever Alex made hot chocolate, he would add some peppermint.

Aromigo changes color and emits different aromas
based on who is currently interacting with the device.

One day, Bailey gets home from work and notices that her Aromigo is pulsing blue, and the room smells like peppermint—Alex is thinking of her! She puts her stuff down and walks over to touch her Aromigo. As soon as she touches it, the light begins to pulse purple, and the smell of lavender slowly enters the air, mingling with the peppermint.

On the other side of the country, Alex sees his Aromigo turn purple, and starts to smell some lavender in the air. He knows this means that Bailey is also thinking of him, and he is warmed by the knowledge that both of them are touching their Aromigos at the same time.

First, we met for multiple ideation sessions - brainstorming, selecting our idea, and then sketching and discussing possible interactions with an aroma-based interpersonal communication device.

Our team brainstormed by listing, sketching out, and organizing our ideas on a chalkboard throughout multiple meetings. 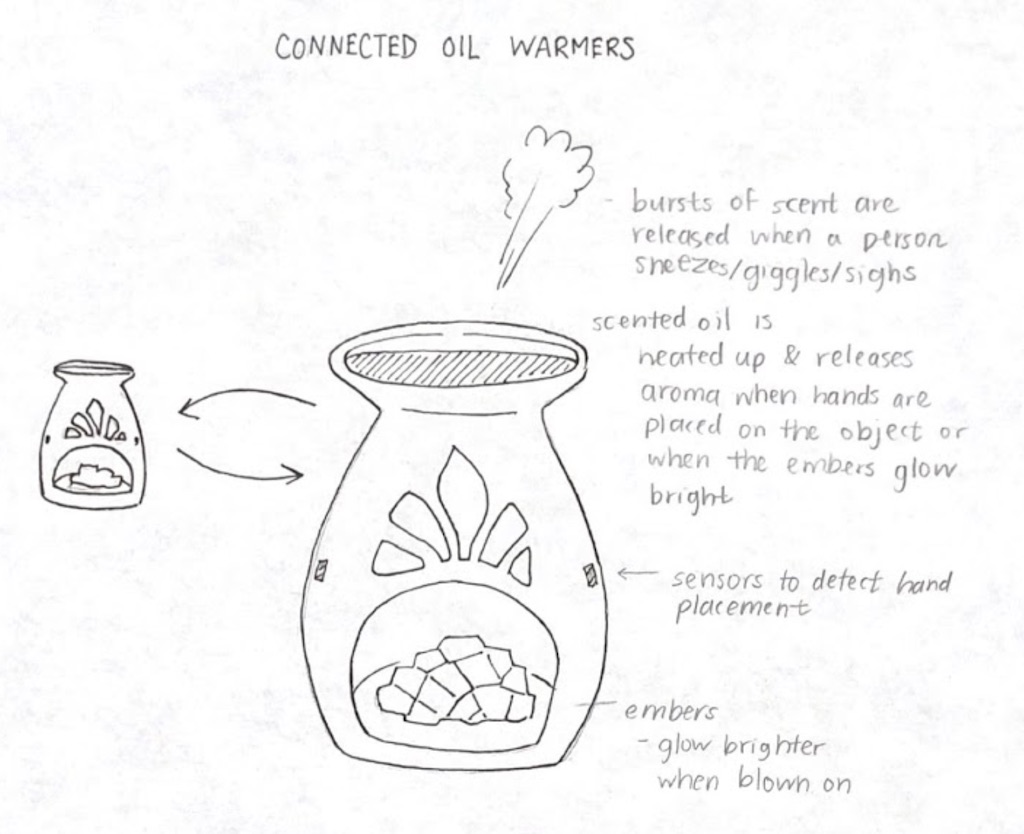 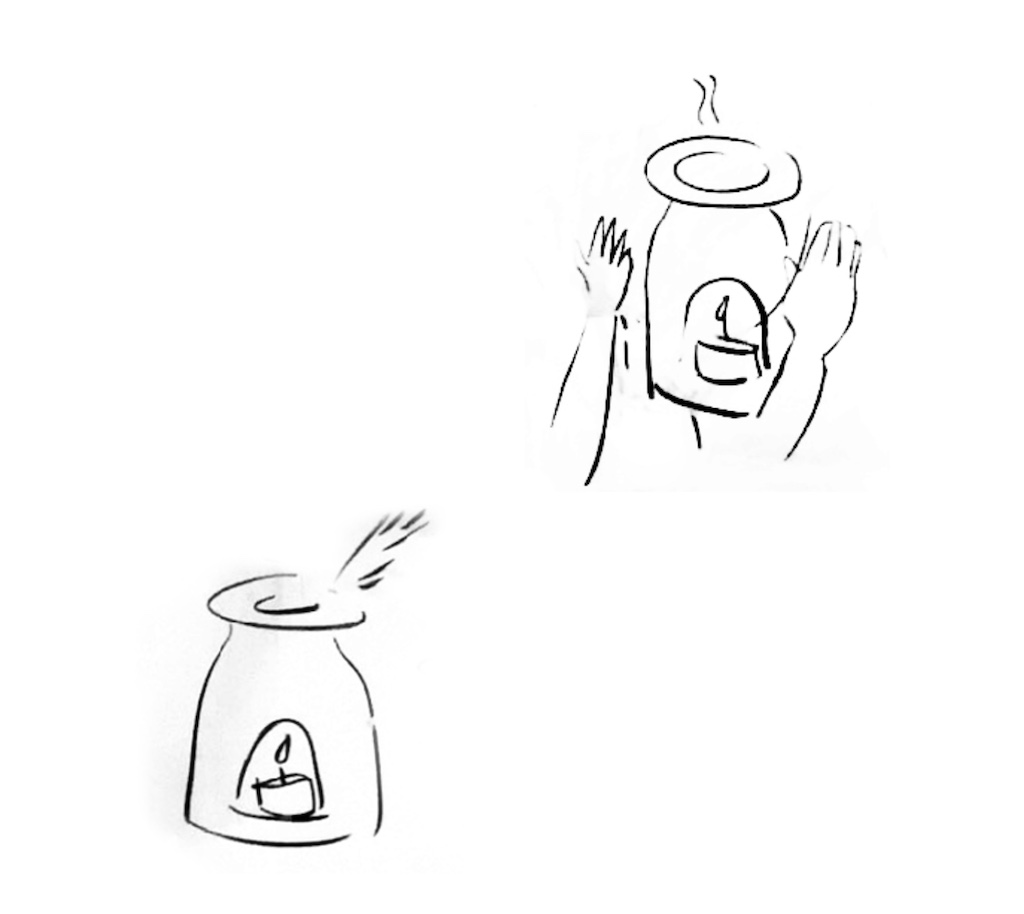 After narrowing down our ideas, Joanne created some refined, labeled sketches to develop the ideas further. Here are the sketches for Aromigo, originally titled “connected oil warmers.”

We then began prototyping, gathering hardware components and writing code for the Arduino. In parallel, we rapidly explored multiple variations of the physical design using a variety of household objects. 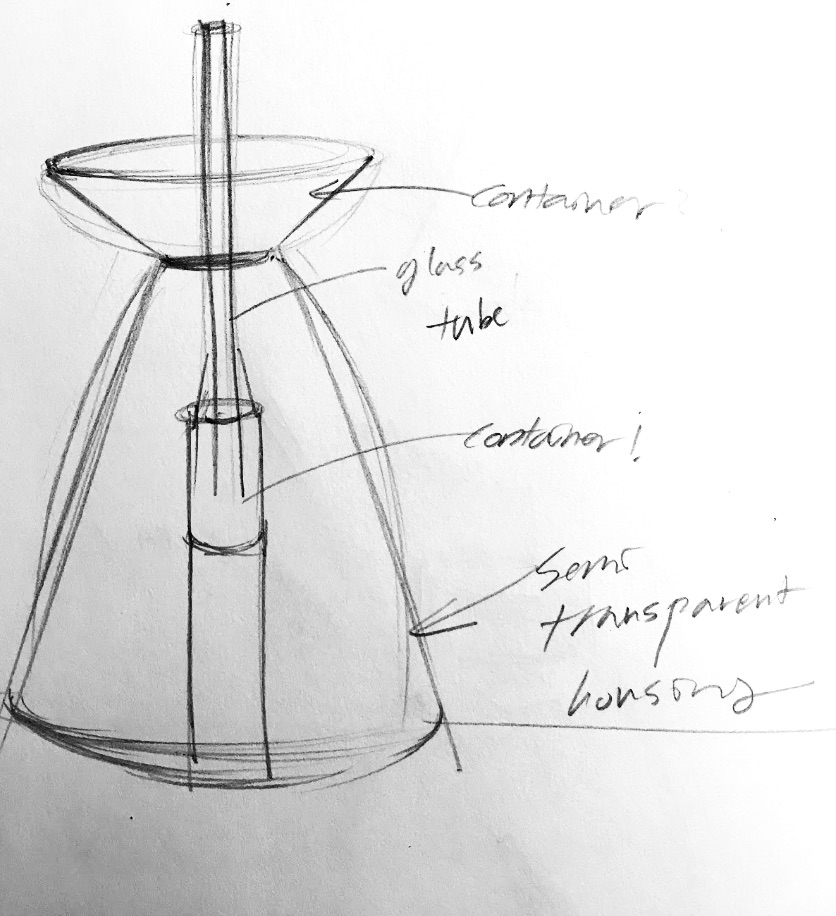 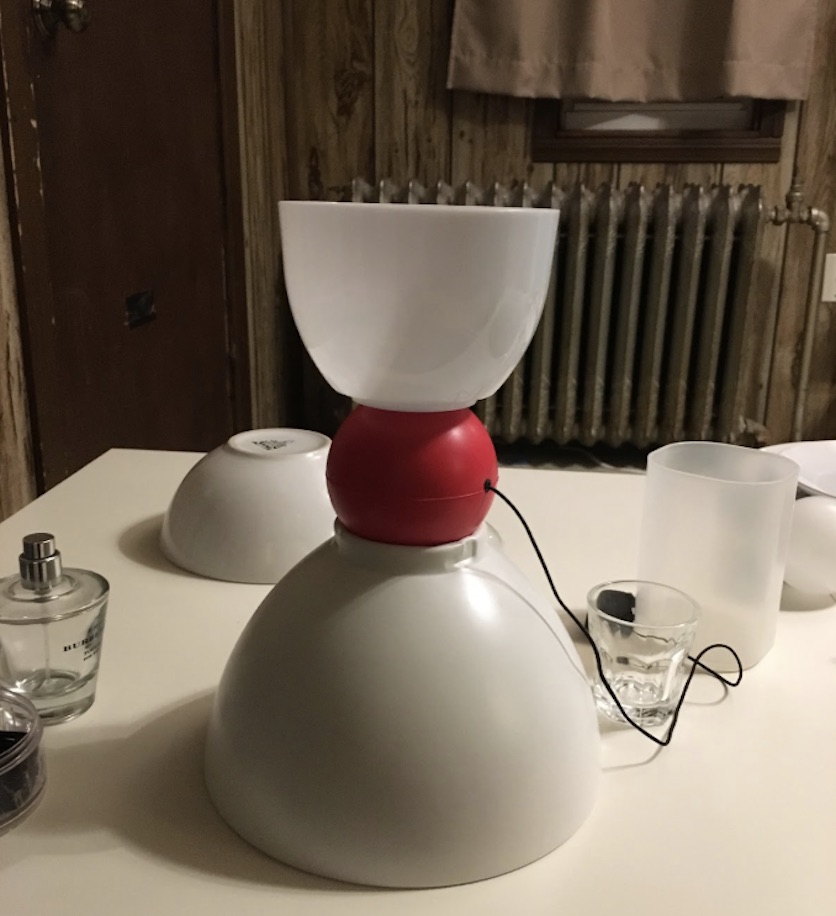 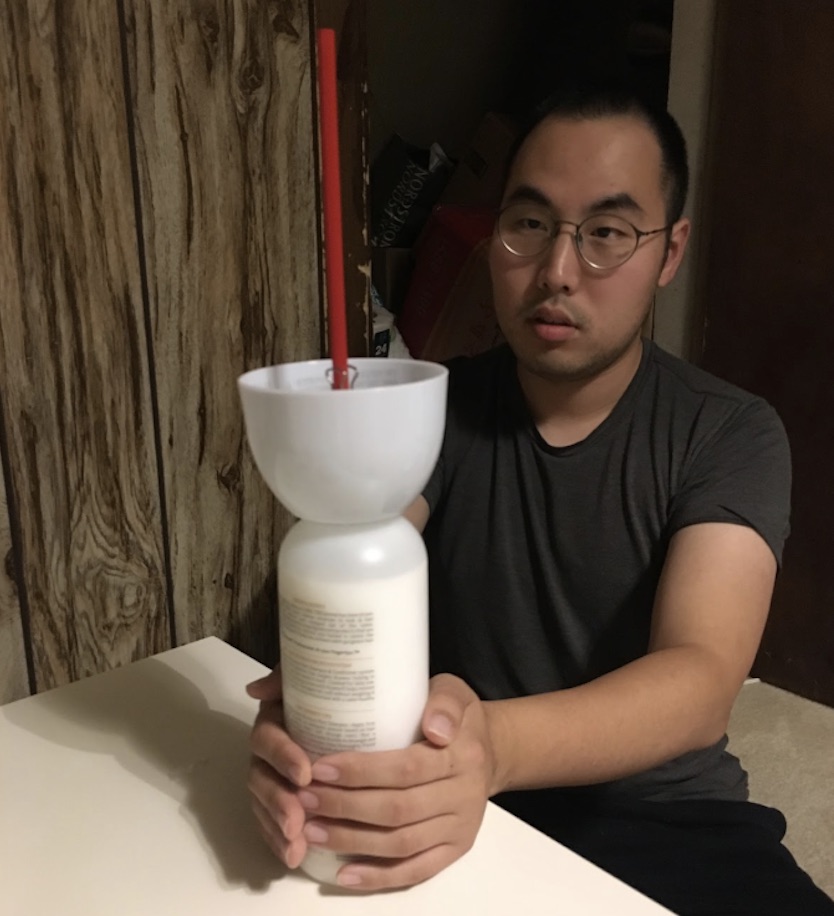 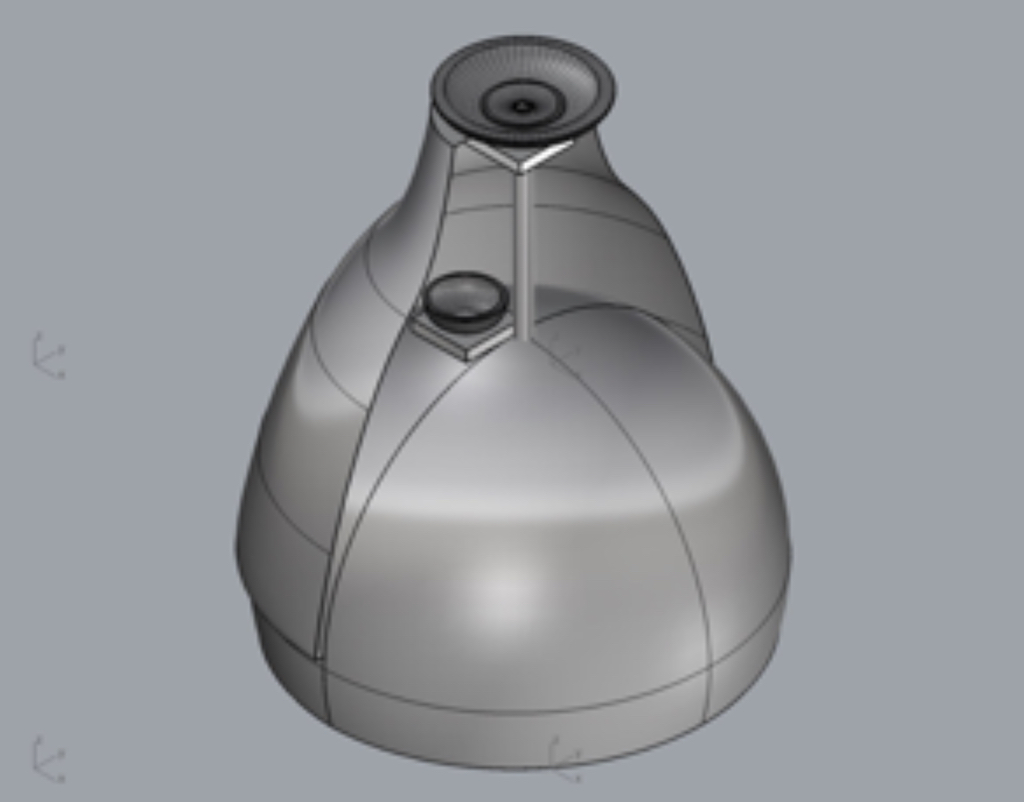 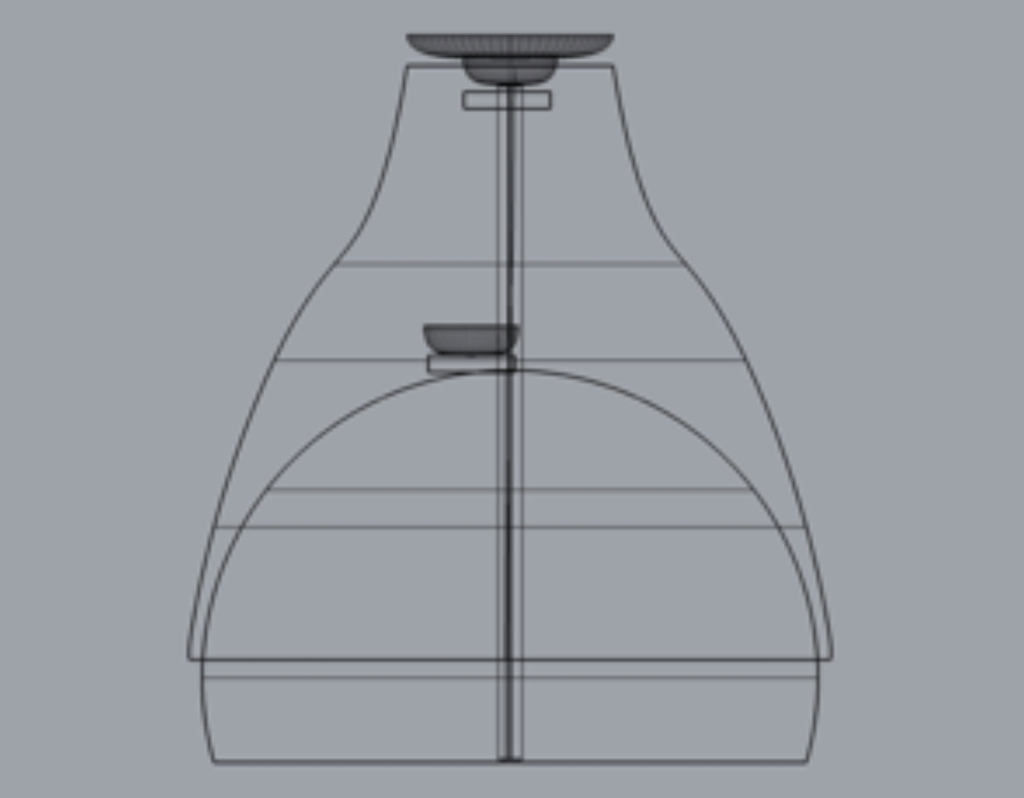 Je Sung began exploration on the physical form of Aromigo by experimenting with household objects.

We decided on the materials, constructed the final housing, and secured the electronics inside. After several iterations, we arrived at the final configuration. 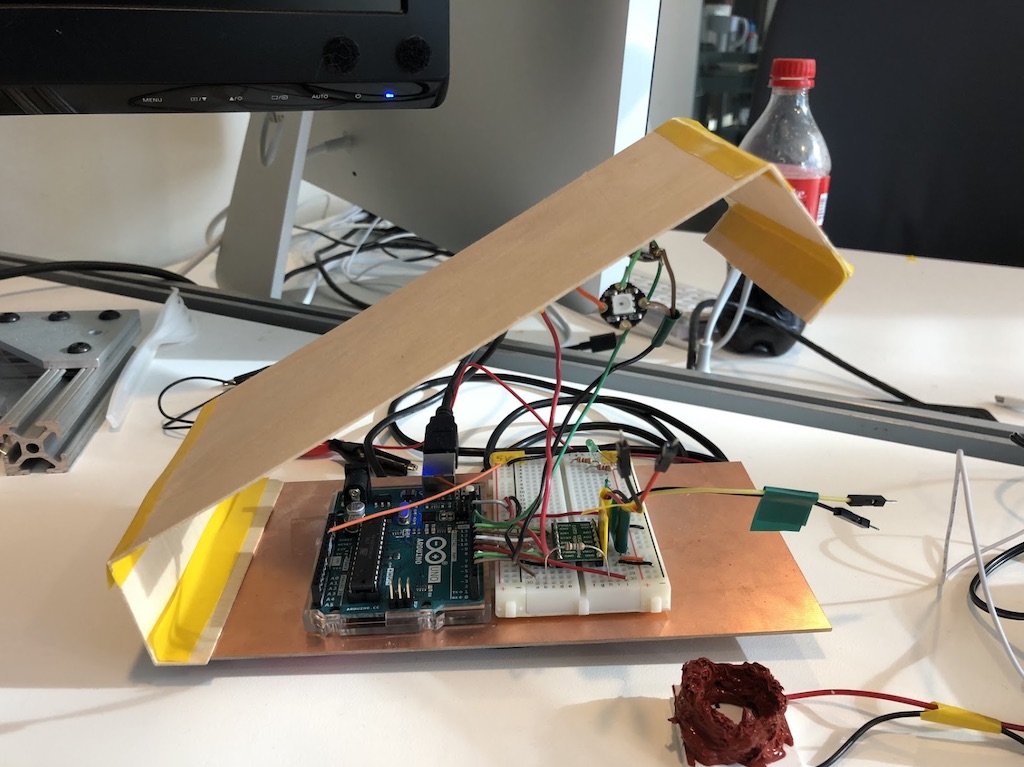 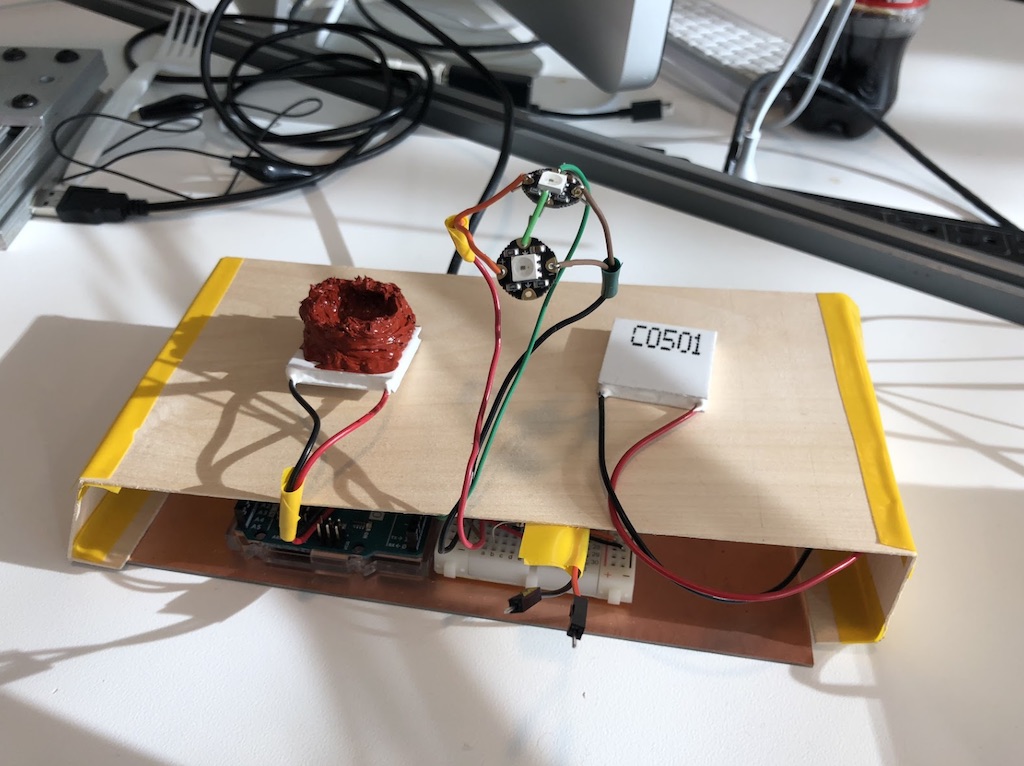 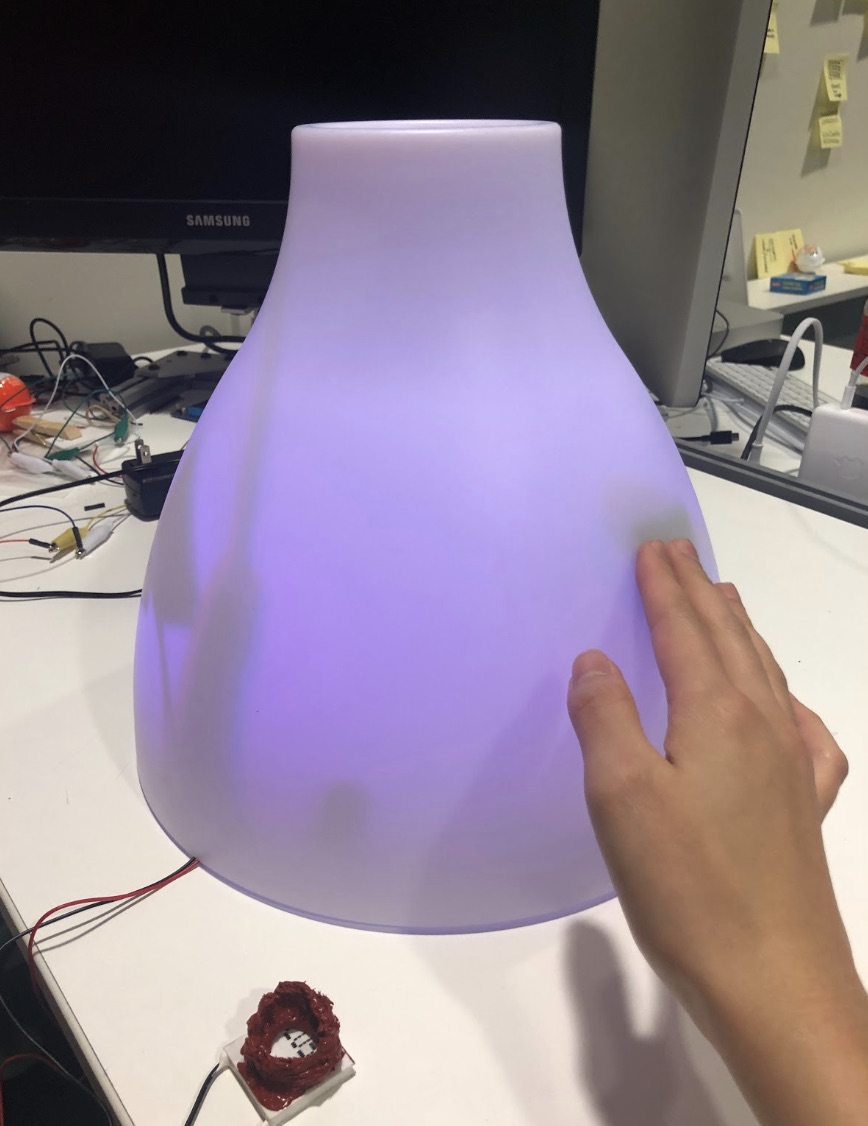 Later stages of prototyping the interaction with Aromigo using the capacitive sensor and LEDs.

An essential step in interaction design is thinking critically about the affordances of the design. Here are the perceived and intended affordances we compiled in our analysis.

Each Aromigo device consists of a white, semi-translucent polycarbonate lampshade with a small rim at the top and a larger rim at the bottom. The lampshade sits on top of a wooden bowl. 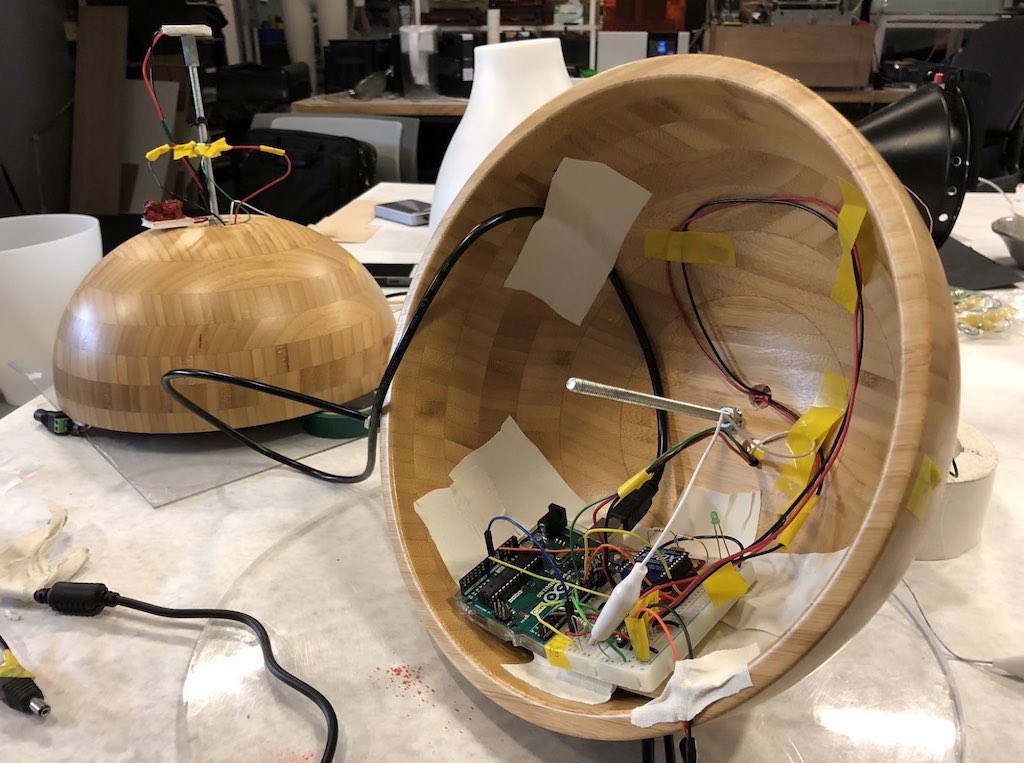 The inner workings of Aromigo.

The electronics are tucked away from sight, attached to the inside of the bowl using tape. A hole drilled into the top of the bowl allows for the bolt, which supports a peltier, and several LED wires to come through.

Inside the bowl, the components are driven by the Arduino Uno microcontroller. The Uno takes inputs from the capacitive sensor on this device, as well as through the XBee (receiving information from the partner device), and uses that information to control the LEDs and the peltiers (through the motor driver). 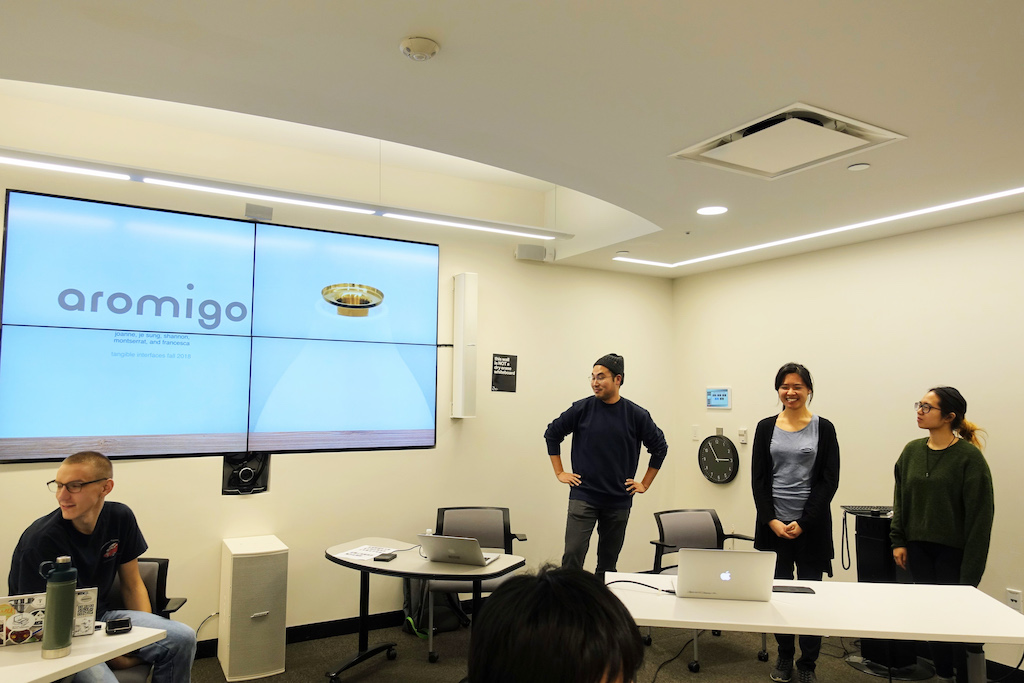 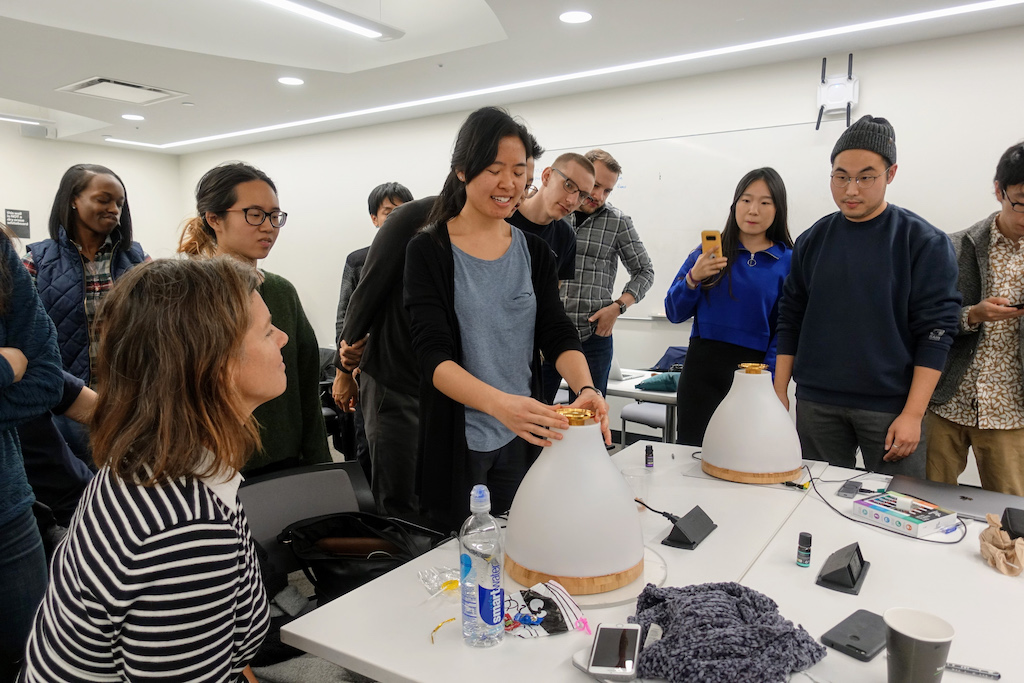 Our final presentation and demo in class.

Through Aromigo, I learned about analyzing affordances and illustrating interactions with narratives, as well as working with new hardware components (controlling peltiers and networking via XBee) and smoothing sensor signals.

Aromigo also gave me a venue to explore new questions and areas of design. While most products seek to make our lives more convenient now, Aromigo addresses our emotional needs and envisions how technology might connect us many years into the future.